Cara Delevingne and Miranda Kerr give us an exclusive look at Stella McCartney Spring 2014 backstage at Paris Fashion Week.  Miranda and Cara adore Stella McCartney for the same reason, “the Stella girl is effortlessly chic and elegant without having to try”.

Stella McCartney’s Spring Summer 2014 collection is all about the idea of approaching summer “in an honest way – the masculinity is still there but it’s also about that fluidity and femininity, it’s the idea that the clothes aren’t wearing you” she explained just moments after the show.  It’s one of the strongest collections by Stella McCartney, full of gorgeous clothes and some of the hottest accessories that we want now – especially the sunglasses.

The beauty look makeup artist Pat McGrath created for the show perfectly captures that Stella cool-girl look.  As Pat explained backstage “Stella wanted something more rebellious so we did an eyeliner on top of the eye and underneath the eye as well. It’s natural, fresh, tough and strong”.  The chic look that Eugene Souleiman created was “quite strict but had a softness about it”.  Models wore ponytails with a deep side part that gave them a masculine look but had a fresh sexiness about it.

Miranda Kerr bares all for the cover of British GQ photographed by Mario Testino and styled by Katie Grand. In the revealing cover story the 30 year old former Victoria’s Secret supermodel who recently split with husband Orlando Bloom, tells the magazine that she is loving being single again and is exploring her sexuality.

“The older I get, the more confident I am about asking for things I enjoy,” she tells British GQ. “One thing I’ve noticed is now that I’m having less sex my body isn’t as toned. The more

Cara Delevingne, Miranda Kerr and a galaxy of 26 stellar supermodels are featured in a new film for i-D Magazine titled ‘A-Z of Wink’.  The film directed by Jérémie Rozan with fashion direction by Charlotte Stockdale  bring’s some of I-D’s fashion alphabet series to life.  The short film, promoting the launch of i-D’s new website and video series, brings the slogan “If in doubt, wink, peace and pout!” — to life perfectly.

Adriana Lima and Miranda Kerr and some of the world’s top male and female models answer the question “What is Love?” for the Romeo & Julliet story for Harper’s Bazaar November 2013 Issue. 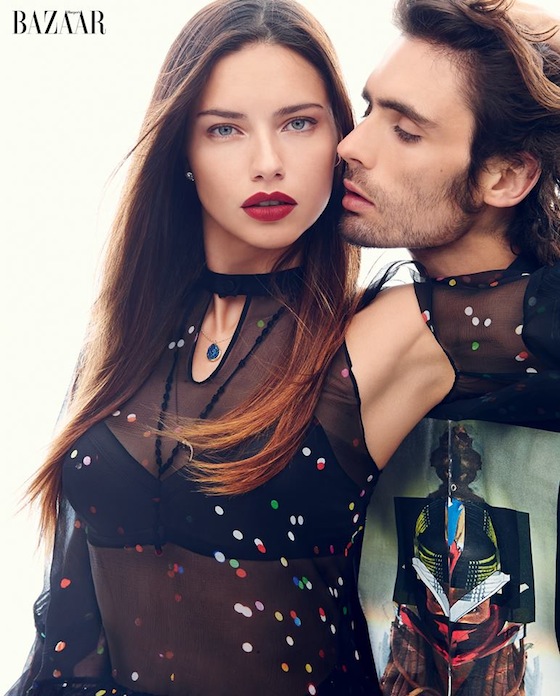 The ‘Romeo and Juliet” inspired shoot was styled by Harper’s Bazaar Global Fashion Director  Carine Roitfeld and photographed by Max von Gumppenberg was made with the creative direction of Stephen Gan.

See more images from the story at the new Harper’s Bazaar  magazine website that relaunched yesterday.  Check it out – we are already addicted.

The Pirelli Calendar 2014 is back. For the celebration of it’s 50th anniversary the Italian automaker teamed photographers Patrick Demarchelier and Peter Lindbergh with supermodels Alessandra Ambrosio, Miranda Kerr, Helena Christensen, Karolina Kurkova, Alex Wek and Isabelli Fontana. The limited edition calendar is given as a corporate gift to some of the brand’s most important customers and VIPs.

In the behind the scenes video clip Lindbergh explains why he loathes the word “sexy,” and which Brazilian model tops his favorites list. Here are a few of the stunning photos from the shoot released by Pirelli which according to British Vogue is set to be released in November 2013.

For the first time, top models Cara Delevingne, Jourdan Dunn and Barbara Palvin are appearing in the VS lingerie fashion show,  which is the biggest fashion show event of the year seen by millions of viewers around the world.Save the date!  Be sure to watch the Victoria’s Secret Fashion Show 2012 one hour special airing on CBS Television on December 4, 2012 at 10 PM EST. Shop the collection online at VictoriasSecret.Com.

Watch our behind the scenes video at the Victoria’s Secret Fashion Show 2012 here now.

In Paris we get an exclusive look backstage at John Galliano Spring 2012 with makeup artist Pat McGrath, hairstylist Orlando Pita and top models Karlie Kloss, Miranda Kerr and Constance Jablonski. The beauty look was inspired by silent movie star Mary Pickford, so Pat used sepia blush on the cheeks and paled out the model’s skin with a light foundation to make the girls look “sweet and innocent“.

This was a confident first collection for Galliano’s new Creative Director Bill Gaytten, and he stayed true to the brand’s feminine aesthetic. Gaytten worked along side John Galliano for over 23 years, so he knows how the Galliano girl wants to look and feel. The bias cut evening dresses were sexy and romantic and just the way you want to look in summer. To shop the collection check out the new John Galliano online store.